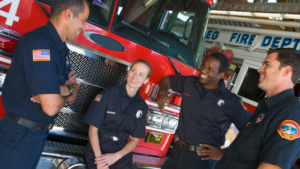 I recently had the opportunity to offer team training to a local volunteer fire department.

Prior to the training, I met with the fire chief. Almost immediately he shared his concern: to grow a dwindling fire department force or ask the town to find the money to fund a full time, paid fire department. Town residents already pay considerably for their services, so the likelihood of a fully staffed, paid fire department isn’t in the works anytime soon.

The fire chief and I discussed and identified the department’s primary challenges:

The most important part of any volunteer fire department, of course, is its volunteers. Equipment and training are important, but it’s hard to justify if you don’t have the numbers to support them either.

Volunteerism is in decline in the U.S., particularly among today’s younger generation. That said, statistics are somewhat fuzzy and tough to genuinely quantify. As Bill Belichick, coach of the New England Patriots once said: “Stats are for losers. The final score is for winners.” Statistics about volunteerism do not solve the problem of recruiting and retaining more volunteers.

Gaining public attention to entice individuals to volunteer is what matters and has the most traction. The final score of your efforts is a win when you bring in new recruits; efficient and effective recruiting is key.

Today’s U.S. military is an all-volunteer force and has been since the 70s. It’s also a ‘selective’ service: less than four in 10 men and women, physically, mentally and morally qualify, compared to roughly five or more a little over a generation ago. Yet, each branch generally meets their quotas, and the overall quality of recruits is at an all-time high. That’s despite a reduction in the recruiting force, which by necessity, is more efficient and effective today.

The Department of Defense has deep pockets for the recruiting effort. Big money and active recruitment helps, but still doesn’t account for its ability to hire men and women to fill physically demanding, dangerous and unglamorous jobs. Scrupulous testing and quotas help determine who qualifies. If a recruit ends up offered one of those unglamorous jobs, there are many additional incentives to join up anyway: solid health and education benefits, the opportunity to change jobs once in, promotion with more pay, and a defined benefit pension plan.

Key Lesson: Do Something Bigger Than Yourself

We can’t offer those things to volunteers for a fire department, but we can entice them with an important message our military also uses: do something bigger than yourself. The benefits of that have intrinsic and extrinsic value.

Once enticed, the follow up for volunteers who show up at our door includes an introduction to the existing team. There can be no arrogance, lack of communication, or unwillingness to welcome anyone expressing interest in joining the team. On the contrary, there must be exceptional ‘customer’ focus shown them. No one told them they had to volunteer, and we’re asking them to perform a challenging and dangerous job for free or with minimal compensation.

The existing team must be ‘all in, all the time’ and welcome would-be wannabes. They must communicate that through their actions, interactions and deeds; always. Too many times during my years recruiting future SEALs and other special operations wannabes, I witnessed the loss of exceptional young men and women expressing interest in service who walked because, somewhere along the recruitment path, they had a lousy experience with someone who didn’t seem to care about them. That shouldn’t happen. The existing team must mentor new volunteers. They must exemplify good mentors to the best of their ability.

Writing this post was fun, but not easy. Why? I wanted to highlight the conclusions the fire chief and I came to, and list the problems we identified along with potential solutions. Clearly, the chief and I continue to have our work cut out for us. Add to that the challenge we had communicating the problems clearly and succinctly. Clear and concise communication, in all its forms is always tough, but critical to success in work and life.

Communication exists in many forms. Whatever form it takes in the moment, and in this case as it involves recruiting more volunteers for the fire department, it must be consistently positive and highly effective to entice aspiring firefighters to want more information, and then join the team.

To inspire individuals and organizations to achieve excellence through personal challenge, to join the team, is critical, even with volunteers.